Slow Down to Go Fast

I had the opportunity to speak with one of my clients this week about how to get more done. We had a good conversation and when it was concluded he had a couple of nuggets to think about. He sent me a follow-up email and said: I am a thinking person, and you got me thinking…

Work Hard or Work Smart?: First, we talked about how his last couple of weeks had gone. Crazy busy was his reply. He was frustrated and running on just a couple of hours of sleep because he had been burning the candle at both ends most of the last couple of nights. He had been under so much pressure that he hadn’t had the time to think. He was stuck reacting to the events that were driving him. I reassured him that he was not alone. He had plenty of company. Many of us get locked into habits and routines when the pressure mounts. We trick ourselves into the safe notion that if we work “hard” we will be able to work our way through the pressure and stress. Work Hard. Sounds like a good approach, doesn’t it? The problem with that is that the habits and routines don’t get us out of our predicament. We have to recognize that working hard, won’t solve every problem. Many times we must work intelligently to turn things around. Situational management requires that we make better choices and work smarter to maximize our work. I advised my client to work smart and slow down to go fast. How do you slow down to go fast?

Stop Multi-Tasking: Many times, when the pressure is on, people will attempt to multi-task to catch up to their mounting responsibilities. The problem is that multi-tasking is largely a myth for almost everyone. I’m sure that there is someone somewhere on this planet who can do five things at once with aplomb. The problem is, I have never met her, and I doubt that I ever will. In my experience, multi-tasking just leads to errors and omissions and apologies. I told my client to do several things to slow down and go fast. First, slow down. Take a deep breath. Take another one. Listen to your breath go in and out. Count to ten. Count to ten again. Let the emotion drain away. Think about your situation. Focus on what is most important. Think about removing fear and emotions from how you’re feeling about the work. Then, when your blood pressure has dropped, go to work on the most impactful, most important thing and work on it until it is done. Slow down to go fast.

Delegate: My advice to my client? This may shock you, but I asked him why he was the only one working on the customer problem at Oh-Dark Thirty in the morning. I asked him why the guy who he delegated this task to previously wasn’t working with him? He had delegated this work, and when the going got tough, the employee handed this problem back to my client, and he accepted the problem and took ownership of it. Wrong approach, if you ask me. Once we delegate something to a member of our team, we need to make the expectation really clear, that ownership for the result has now transferred. Once you delegate a task to a member of your team, you should almost NEVER allow them to give up when the going gets tough and delegate it back to you. How do you do this, he asked? Easy, you tell him HE owns this and has to find a solution. You let him know that if he gets stuck, he can call you to ask for suggestions on how to handle the task. Let him know you’ll HELP him, but that you will NOT do the work for him. My client was protecting his staff member from a difficult task that was going to involve some sacrifice, which is just the sort of challenge he probably needs to develop the kind of strength of character and ability that got my client promoted to management.

Pick 3 Things A Week: When the world is closing in on you, and you’re having a hard time staying focused on what is important, remember to set manageable goals for yourself. If you’ve got 75 priority items on your To Do list, you need to simplify things again. Don’t try to boil the ocean and do everything in a week. Just pick three really important things from your To Do List and get them done this week. Not 10, not twenty, just three. If you get three things done each week, that’s 12 or 13 things done each month, which will be plenty. Slow down to go fast.

Step Away: After you’ve been working 20 hours a day for several days, a few things begin to degrade. Your patience is sure to be one of the first things to disappear, along with your sense of humor, your creativity and your ability to concentrate. When you’ve worked every day for the last two weeks, you need to take a break. More than anything else you could do, taking a break will give you the biggest bang for your buck. By resting and taking a break, you give your body a chance to recharge, and you give your conscious mind a chance to break as well and recover. Best of all, by resting, you engage your subconscious mind, which is where most of the breakthroughs and epiphanies come from, when you’ve been stuck. Give it a try.

That’s how you slow down to go fast. By simplifying things, by thinking, and choosing with intelligence, we give ourselves a chance to put situational management to work for us, and leave the habits and routines of hard work behind. I hope this helps you in getting yourself out of the rut, and gets you back on the productivity autobahn, instead of the back alley. If you’d like more information, leave a comment below about the article, and we’ll email our Best Practices pdf document on Delegation to you free of charge. Have an amazing day. 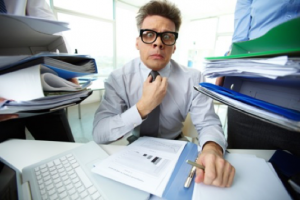 I’ve been in the Arizona desert for a winter break[...]

My Team Is Behind On Their Number, How Do We Catch Up?

I heard this question from a VP of Sales recently.[...]

Click on “Read More” to watch a video on starting[...]