Home BlogStaying The Course: Developing Culture With An Unwavering Commitment To Excellence 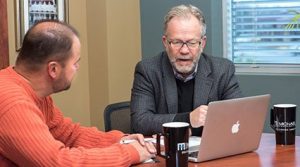 I get the opportunity nearly every day to work with “up and coming” emerging leaders and first-time managers. It is gratifying work, and I consider it more a calling than a job. I’ve had some leaders in my personal corporate life who were soft and tolerating, and I’ve had some leaders who were tough as nails and refused to accept work that was less than my best. Guess which ones brought out the best in me, and the very best in everyone else around me? That’s right! The tough as nails approach is by far the superior approach when you’re building the culture of your team. If this topic interests you, read on…

Dynamic Leaders Are Tough, And They Demonstrate How We’re Going To Win

I don’t have any doubt whatsoever that the very best way to lead people is through a humanistic people-centered approach. For decades, I’ve seen great success seem to follow leaders who care about their people, encourage their people, stay proactive and positive around their people and help them to dig deep and summon their very best strengths as they work. Along the way, I’ve noticed that being a great people-oriented leader is not about motivating people by being tolerant and soft, it’s not about being tentative and weak. On the contrary, I’ve learned through my own experience and observations that the greatest leaders and managers motivate their people to greatness by being tough as nails on their expectations and their standards of quality and excellence.

Great leaders motivate their people by inspiring them to aim high, to continue to aim high, and then to aim even higher once you begin to build momentum. These great leaders are not soft, they are dynamic and demanding. They stick to their guns, and they hold to their principles with a tenacity that is hard to fathom in mere mortals but is impressive as hell when you see it in action. Great leaders surround themselves with people who like to compete, who like to win, who like to challenge themselves so that they can see in the long run what they are capable of.

Great leaders build a culture of outstanding execution, where it’s clear to everyone that we’re not going to be satisfied with second place, we’re in it to win it! They show through their conduct day in and day out that everyone on the team is expected to bring their best every day, and that furthermore, they are expected to invest broadly and deeply in their teammates to help EVERYONE to participate in the winning. Great leaders teach their teams to become great teams and they train them and coach them to become amazing collaborators. As the members of the team gain skill and confidence collaborating at the highest levels, the team begins to win more frequently, and the team, in essence begins to become accustomed to (some might say almost addicted to…) performing at the highest levels and winning.

There is absolutely no reason that you cannot implement this type of teamwork and culture in your organization. You may have to change to do it, and you may have to get one or two steps outside of your comfort zone to become a strong dynamic leader, but I have seen it done frequently, and I know you can do it if you commit to the idea completely.

Dynamic leaders are not soft. They are not weak. They are taxi-tested tough as the commercial used to say. They are rough as a cob. They are tough as nails. They are also smart as heck, because they realize that if they never waver on their principles and on the standards with their team, their teammates will either buy-in and commit to great work, or they’ll opt-out and leave the team, opening up a spot on the team for someone better, who WILL commit to the culture. Realize that while those tough leaders are holding to incredibly tough standards they are also filled with love, and caring about their people and their teams very deeply. It’s a winning combination. It’s a deadly combination that you can leverage against your competitors. It’s a winning formula that leads to the building of great culture, where expectations are clear, and everyone gets busy getting stronger, and getting better. In those cultures, everyone is inspired and motivated by the “tough as nails” leader who is dynamically leading the team to practice, practice, practice, so that they become stronger, faster, smarter, and better, and they win! They win again, and again… and again.

Great Ways To Leverage Your Time!

I hear from business leaders every day that they are[...]

Everything rests on the culture YOU build... https://youtu.be/-NU9a2kdfLk Michael is[...]

Earlier this week I watched as the New England Patriots[...]